US Navy Not Prudent Mariners?

Blog Editor’s Note: This was the US Naval Institute Proceedings “Proceedings Today” daily post for November 21st 2017 under the title “Prudent Mariners Need a GPS Backup.”

Since Nathaniel Bowditch first put pen to paper in 1799, those practicing the art of maritime navigation have had as a first rule: “Prudent mariners use all means available to determine their position.” Today, the modern version of Bowditch’s “ The American Practical Navigator ,” published by the National Geospatial Intelligence Agency (NGA), more expansively says:

Use all available fix information. With the advent of accurate satellite navigational systems, it is especially tempting to disregard this maxim. However, the experienced navigator never feels comfortable relying solely on one particular system. Supplement the satellite positions with positions from Loran, celestial fixes, radar lines of position, soundings, or visual observations. Evaluate the accuracy of the various fix methods against the satellite position.

Despite the wisdom of the maxim and NGA’s updated advice, vessels continue to ground themselves and otherwise go astray—even, sadly, those of the U.S. Navy.

In 2014 the USS Taylor (FFG-50) ran aground in the Black Sea. In 2016, two riverine patrol craft were captured when they strayed into Iranian waters. And in January 2017, the USS Antietam (CG-54) ran aground off Japan.

In each case there had been an easily accessible electronic navigation system in the region the ships could have used but did not. Known as “Loran-C” (along with a nearly identical Russian system known as “Chayka”), this high-power, low-frequency system, works similarly to GPS, though it is a terrestrial rather than a satellite system. Transmitters provide a highly accurate time signal and receivers integrate signals from three or more transmitters to determine location. As the image here shows, Loran/Chayka service has been available in most Russian waters, including the Black Sea, in much of the Middle East, and Northwest Asia (China, South Korea, and Japan) for more than 50 years. Loran’s radio characteristics make it exceptionally difficult to disrupt, especially compared to the very high-frequency, low-power GPS system. 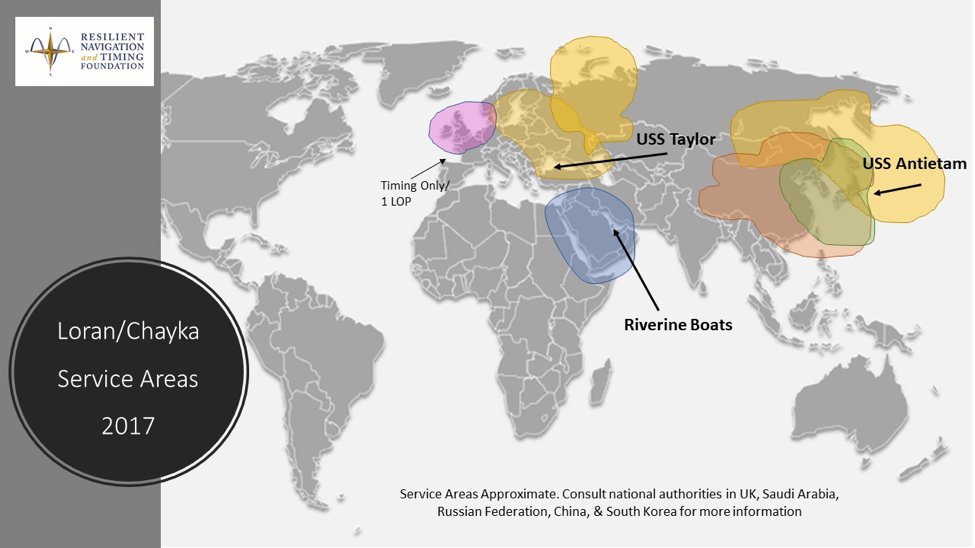 The U.S. Navy began to remove Loran-C navigation equipment from its ships after the U.S. and Canadian governments shut down their Loran-C transmitters in 2010. At the same time, though, the U.S. government had committed to building enhanced Loran—eLoran, a next generation positioning, navigation, and timing system that would use small, inexpensive receivers—to provide a complement and backup for GPS. It is believed a combined GPS/eLoran navigation system would be extremely difficult to disrupt.

Given the U.S. Navy’s global operations, it is curious that the service chose to remove Loran-C systems from the fleet while other nations continue to operate transmitters. Having two distinct electronic navigation sources would provide a bridge crew an alert should one of them be compromised and start to wander. Such equipment might have provided warnings for the Taylor , the Antietam , or the riverine boats before they strayed too far. There is no way to know for sure if it might have helped those ships and boats because they did not have the equipment on board.

Maritime Loran-C/Chayka and eLoran receivers that comply with international standards are readily available and can access signals in many important global waters. Prudent navigators, including those of the U.S. Navy, should take note.

Captain Goward is President of the Resilient Navigation and Timing Foundation in Alexandria, Virginia. As director of the U.S. Coast Guard’s marine transportation systems program, he led 12 different navigation-related programs. He has represented the United States at the International Maritime Organization, the International Association of Marine Aids to Navigation and Lighthouse Authorities, and the United Nations antipiracy working group. A licensed helicopter and fixed-wing pilot, he also has served as a navigator at sea.