Blog Editor’s Note: Describing a “civilian battlefield,” Mike Jones from Roke Manor gave an outstanding presentation this week to the US National PNT Advisory Board. He discussed the ease with which GNSS jamming and spoofing can be detected, and available technology that can make GNSS receivers much more resilient to jamming and spoofing. 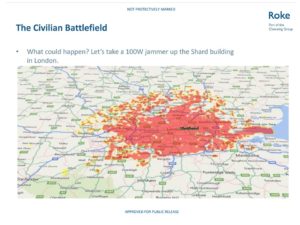 He also mentioned an interesting use case in which addition of an inertial sensor to a GNSS receiver ensemble made no difference in its ability to be spoofed. Without the equipment moving from the lab, he was able to write the word “Roke” with the reported track of the spoofed device. 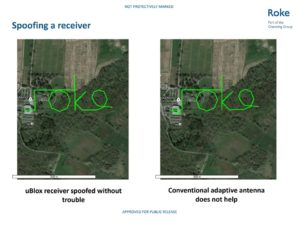 Despite equipment that helps receivers resist such efforts being readily available, these technologies don’t seem be being used. In fact, Jones cited one product that was taken off the market for lack of demand.

Jones concluded that without government-imposed requirements, a massive financial loss will be required before customers will be willing to purchase and use such devices.

Mike Jones is a Senior Consultant Engineer and Capability at Roke Manor. He also writes on defense issues for “GPS World.”