Editor’s Note:  An alert reader sent us the below item from an electronic newsletter. We are not sure about the title of the piece, though. Seems like the Air Force is VERY worried about not having GPS, and thinks it is a real possibility. Else, why spend all that money? 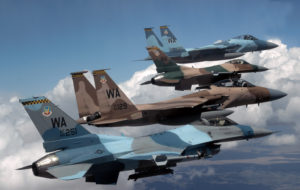 NO GPS? NO WORRIES

The Air Force spends billions of dollars launching and maintaining the GPS constellation on which the world depends. But fears of bad actors intentionally jamming or spoofing signals also are fueling investments in alternative navigation technologies. Case in point: The Air Force Research Laboratory teamed up with Northrop Grumman to develop software called “all source adaptive fusion” to guide aircraft to targets on land or sea without using GPS satellite signals.

Northrop Grumman developed the concept and the AFRL invested in the “maturation and demonstration over the past several years,” said company spokesman Brooks McKinney. “We continue to collaborate on best ways to apply the technology to airborne systems that may need to operate in denied GPS environments.”

The software uses high-speed algorithms and hardware to help navigate from data gathered from a variety of sources including radar, electro-optical/infrared, light detection and ranging, star tracker, magnetometer, altimeter and other signals. It is one of several “denied GPS” approaches used by Northrop Grumman. The company plans to market this technology across the military.