Blog Editor’s Note: This is not a new issue to our regular readers, but it is always good to periodically highlight this issue. Not all threats are from bad actors. Accidents, Mother Nature and the lack of resilience in our major systems are equally or more important factors. 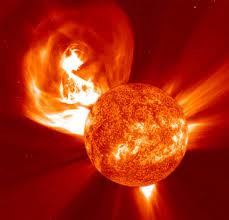 A new model suggests a major such event in 150 years could equal the current U.S. GDP

Humanity has begun collectively grappling with the potential dangers of global threats such as climate change. But few authorities are planning for catastrophic solar storms—gigantic eruptions of mass and energy from the sun that disrupt the earth’s magnetic field. In a recent preprint paper, two Harvard University scientists estimate the economic damage from such an event will increase in the future and could equal the current U.S. GDP—about $20 trillion—150 years from now.

There are precedents for this kind of storm. The so-called Carrington Event of 1859 began with a bright solar flare and an ejection of magnetized, high-energy particles that produced the most intense mag­netic storm ever recorded on the earth. It caused brilliant auroras in the atmosphere and even delivered electric shocks to tele­graph operators. But a Carrington-scale storm today would cause far more harm because society now depends so heavily on electrical power grids, communications satellites and GPS.