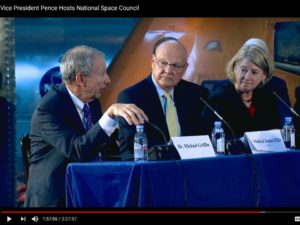 Vice President Pence chaired the new National Space Council’s first meeting on the 5th of October. The third panel discussed the importance of space assets and their security.

“When we talk about economic infrastructure, I don’t think the general public realizes the extent to which the Global Positioning System’s timing signal is critical for these ATM transactions and every other point-of-sale transaction conducted in the United States and throughout most of the world… To what extent do we believe that we have defended ourselves if an adversary can bring our economic system near collapse?” – Video here.

The Director of National Intelligence, Dan Coates, also made observations about space security and the capabilities of US adversaries.