Heightened tensions on the Korean peninsula highlights the need for investment in alternatives to satellites for ship positioning.

Maritime security should be enhanced worldwide with alternatives to Global Navigation Satellite Systems, such as GPS. This is because it is so easy and cheap for nations, or criminals to disrupt, or spoof, GPS signals to ships.

Ship bridge systems use a GPS signal to locate the vessel on electronic charts, while navigators need the signal to understand their location in relation to other ships.

If the signal is disrupted, vessels are unable to continue their voyage or other maritime operations, unless they have an alternative method of positioning. Alternatives to GPS include Russia’s Glonass and Europe’s Galileo constellations, but they too are prone to disruption.

South Korea has faced these maritime security problems before as alleged interference from North Korea has led to hundreds of fishing vessels having to return to port because GPS signals were jammed.

As we have highlighted previously in Marine Electronics & Communications, an updated version, known as enhanced or eLoran, would provide a viable and more secure alternative to GPS for ship positioning.

It is a powerful radio signal from coastal transmitters that all shipping could use for positioning.

There have been trials in the UK and South Korea of eLoran and investment plans. But this would be too little, too late for South Korean maritime industries if North Korean threats lead to war.

Some of the eLoran initiatives in Russia and Europe have stalled, while the US administration is still considering investment. However, governments globally should recognise the maritime security risks of depending too heavily on GNSS services and invest in eLoran immediately.

Editor’s Note: While we don’t know the status of eLoran in Russia, we do know that their Loran-C/Chayka system is still going strong.  Here is a graphic of Loran-C coverage worldwide as of this year: 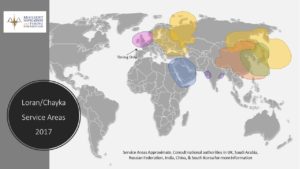