The first is that the US Navy is not done examining the possible impacts of cyber (we hope to include possible GPS jamming and spoofing) on recent collisions. While they have said no evidence was found of a cyberattack on USS McCain, no such statement was made about the other vessel involved. Also, it is not clear if the Navy considers disruption of GPS to be a “cyber” incident.

The second article says that Navy ships will start transmitting their positions using AIS in high traffic areas. AIS was developed as an anti-collision tool and allows vessels to “see” each other, along with course, speed and other information, on bridge displays. Until now, Navy ships have typically used AIS to monitor the locations and activity of the ships around them, but have not transmitted their position so that they are visible on others’s displays. 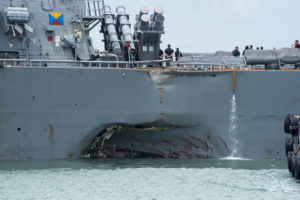 WASHINGTON: The Navy is making cyber investigations automatic after any mishap, starting with the at-sea collision that killed 10 sailors aboard the USS McCain. They don’t expect to find any evidence of a cyber attack this time, admirals emphasize, but they’re using the McCain as a test case.

If there was a cyber attack, however, it’s quite possible that there’s no evidence aboard the McCain to find. It would have been much easier for an adversary to hack the merchant ship involved in the accident, the Alnic MC, causing it to turn unexpectedly across the destroyer’s path. That’s the hypothesis — admittedly speculation — of a Navy IT expert we’ve featured previously in these pages, recently retired Capt. John Zimmerman. He commanded the submarine USS Jefferson City, served as deputy chief information officer at Navy Sea Systems Command, and now is vice-president at contractor SubSystems.

Following this year’s pair of deadly collisions between U.S. guided missile destroyers and merchant ships, the Navy is now considering whether it’s surface fleet is often too stealthy.

Secretary of the Navy Richard V. Spencer and Chief of Naval Operations Adm. John Richardson were peppered with questions Tuesday about their efforts to prevent further collisions while appearing before the Senate Armed Services Committee.

One of the immediate changes to fleet operations, according to Spencer and Richardson, is the Navy’s surface fleet ships will now announce their presence in heavily trafficked shipping lanes.

“Every boat on the Gulf of Maine has a radar on it. When there’s another boat within a mile, or two miles, or five miles and an alarm goes off and shows up on your GPS. How in the world does a billion-dollar destroyer not know there’s a freighter closing in on it? I don’t understand how this could possibly happen,” said Sen. Angus King (I-Maine). “I’ve talked to Maine lobstermen and they’re scratching their heads. They can tell when there’s a flock of seagulls of their bow.”