Navy – “No Cyberattack on USS McCain”

Editor’s Note: Our experience navigating at sea and in the air has shown that human error is by far the most likely culprit in mishaps of nearly every kind. That’s why our response to suggestions of jamming, spoofing or other cyberattack as a factor in the USS McCain and USS Fitzgerald collisions has been “unlikely, but possible.”

The larger and more important issue, though, is the “but possible.”  It is why the US Navy specifically looked into this threat vector for the McCain mishap. It is also why the Navy and the United States should be working to eliminate the possibility it could be a factor in future mishaps.

Fortunately, we know how to do just that. Presentations at the last PNT Advisory Board meeting demonstrated how alloying GPS and eLoran would make the resulting system bulletproof. Presentation 1, Presentation 2.

Note that the below article says the US Navy has ruled out cyberattack on USS McCain as a factor. Navy spokesmen did not comment on the possibility of cyberattack on the merchant vessel, and the Navy did not elaborate on prepared statements when asked by the reporter.

For the record, we think that cyberattack on the merchant vessels as a factor is also “unlikely, but possible.” 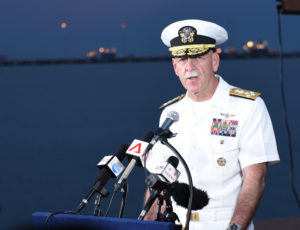 THE PENTAGON – A Navy investigation has turned up little evidence supporting the idea that USS John S. McCain (DDG-56) was a victim of a cyber attack, making it more likely that mechanical failure or crew error is to blame for the Aug. 21 collision between the destroyer and a chemical tanker.

Operation Orion Hammer, the Navy tasking to investigate potential cyber interference in the operation of the guided-missile destroyer, has not uncovered any indications that a cyber attack affected the ship’s control systems just prior to the crash, three Navy officials confirmed to USNI News on Thursday. McCain reportedly lost control of its steering just moments before the collision with tanker Alnic MC in a busy shipping channel.