First, the overt justification for eLoran in this instance is an external threat and its impact on maritime – though aviation and telecommunications have been similarly impacted by the North’s jamming.  As we have opined, governments need to focus on some agency in order to act and  maritime is as good as any, maybe better because of its experience with the technology.

Second, it makes it clear that the delays in S. Korea’s program have been political and governance related vice technical. It is remarkable with all the churn recently in their government that programs like this are proceeding at all. They must see the threat from the North as quite significant.

Finally, the author links the effort to the USS McCain collision. While GPS jamming/spoofing may not have contributed to the mishap, the point most people miss is that it could have. The real issue is that we have the technology to eliminate that possibility but have not. The South Koreans are at least on the path to do so. 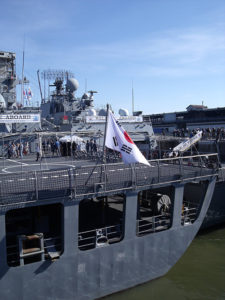 After multiple reported incidents of jamming attacks, South Korea is working hard to develop an earth-based navigation technology as an alternative to GNSS to protect its ships from cyber-attacks.

The planned eLoran earth-based navigation technology is an upgraded version of the radio technology originally used for communication purposes during World War II. South Korea currently has a Loran-C system in place, but it’s looking to improve its coverage. The country’s eLoran project is based on converting and adding to the existing system.

The latest step in the development of the technology follows incidents of jamming attacks on South Korean ships. One such incident last year saw the early return of hundreds of fishing vessels to its ports after their GNSS signals were jammed by hackers, allegedly originating from North Korea.

Professor Jiwon Seo, an advisor on eLoran to the South Korean government, confirms that “attacks from the North” are a driving force for plans to develop a more extensive and powerful eLoran network.

“Our on-going eLoran project aims to build an eLoran testbed by 2019 to demonstrate its maritime functionality in the West Sea of Korea, where significant GPS disruptions have been observed during the past GPS jamming attacks from the North,” said Seo, who is a member of the Resilient Navigation and Timing Foundation (RNTF) Advisory Council.

For the testbed implementation, the two current Loran-C transmitters in South Korea will be upgraded to eLoran transmitters. The Consortium led by the Korea Research Institute of Ships and Ocean Engineering (KRISO) will deploy a new eLoran transmitter to enable eLoran-based navigation, which requires a minimum of three transmitters, Seo said.

Two differential correction stations will be deployed as a part of the testbed to increase navigation performance, and the Consortium is hoping to secure a contract for the necessary equipment purchases this year.

“As the functionality of eLoran has been well demonstrated by the U.S. and the U.K., I do not think the technical challenge to implement the Korean eLoran testbed is high,” Seo said. “However, contractual and financial problems to purchase an eLoran transmitter have been one of the major issues delaying the progress since I first announced the Korean eLoran project at the European Navigation Conference in 2013.”