Editor’s Note: The Black Sea incident in June is almost inexplicable.  The theory put forth below is plausible as to the mechanics of  what happened, but one wonders why the Russian military would reveal its capability is such a haphazard manner. As a warning of what it is capable of?  One would think that another kind of demonstration would be more effective. Perhaps the warning wasn’t for the general public, but for other nation’s militaries and intelligence agencies who are always watching. We do know is that it happened and it was important. Very hard for folks not part of a sophisticated intelligence agency to say much more than that. 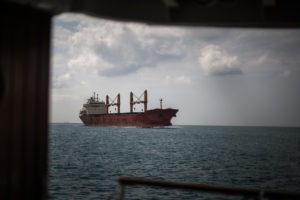 Reports of satellite navigation problems in the Black Sea suggest that Russia may be testing a new system for spoofing GPS, New Scientist has learned. This could be the first hint of a new form of electronic warfare available to everyone from rogue nation states to petty criminals.

On 22 June, the US Maritime Administration filed a seemingly bland incident report. The master of a ship off the Russian port of Novorossiysk had discovered his GPS put him in the wrong spot – more than 32 kilometres inland, at Gelendzhik Airport.

After checking the navigation equipment was working properly, the captain contacted other nearby ships. Their AIS traces – signals from the automatic identification system used to track vessels – placed them all at the same airport. At least 20 ships were affected.

Todd Humphreys, of the University of Texas at Austin, has been warning of the coming danger of GPS spoofing for many years. In 2013, he showed how a superyacht with state-of-the-art navigation could be lured off-course by GPS spoofing. “The receiver’s behaviour in the Black Sea incident was much like during the controlled attacks my team conducted,” says Humphreys.

Humphreys thinks this is Russia experimenting with a new form of electronic warfare. Over the past year, GPS spoofing has been causing chaos for the receivers on phone apps in central Moscow to misbehave. The scale of the problem did not become apparent until people began trying to play Pokemon Go. The fake signal, which seems to centre on the Kremlin, relocates anyone nearby to Vnukovo Airport, 32 km away. This is probably for defensive reasons; many NATO guided bombs, missiles and drones rely on GPS navigation, and successful spoofing would make it impossible for them to hit their targets.

But now the geolocation interference is being used far away from the Kremlin. Some worry that this means that spoofing is getting easier. GPS spoofing previously required considerable technical expertise. Humphreys had to build his first spoofer from scratch in 2008, but notes that it can now be done with commercial hardware and software downloaded from the Internet.

Nor does it require much power. Satellite signals are very weak – about 20 watts from 20,000 miles away – so a one-watt transmitter on a hilltop, plane or drone is enough to spoof everything out to the horizon.

If the hardware and software are becoming more accessible, nation states soon won’t be the only ones using the technology. This is within the scope of any competent hacker. There have not yet been any authenticated reports of criminal spoofing, but it should not be difficult for criminals to use it to divert a driverless vehicle or drone delivery, or to hijack an autonomous ship. Spoofing will give everyone affected the same location, so a hijacker would just need a short-ranged system to affect one vehicle.

But Humphreys believes that spoofing by a state operator is the more serious threat. “It affects safety-of-life operations over a large area,” he says. “In congested waters with poor weather, such as the English Channel, it would likely cause great confusion, and probably collisions.”

Last says that the Black Sea incident suggests a new device capable of causing widespread disruption, for example, if used in the ongoing dispute with Ukraine. “My gut feeling is that this is a test of a system which will be used in anger at some other time.”

While the incident is not yet confirmed, experts think this is the first documented use of GPS misdirection – a spoofing attack that has long been warned of but never been seen in the wild.

Until now, the biggest worry for GPS has been it can be jammed by masking the GPS satellite signal with noise. While this can cause chaos, it is also easy to detect. GPS receivers sound an alarm when they lose the signal due to jamming. Spoofing is more insidious: a false signal from a ground station simply confuses a satellite receiver. “Jamming just causes the receiver to die, spoofing causes the receiver to lie,” says consultant David Last, former president of the UK’s Royal Institute of Navigation.

Link to Article in NewScientist.com