Asia-Pacific Powers Race for a Backup to GPS – The Diplomat

Editor’s Note: Good article from “The Diplomat.” About two-thirds the way through the reporter makes the point that the issue more important than navigation for navies (and everyone else) is the reliance on GPS for network timing. He clearly did his homework. 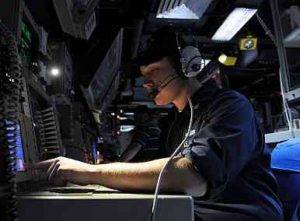 Asia-Pacific Powers Race for a Backup to GPS

Nations in the Asia-Pacific region are working to make GPS more robust and resilient for their navies.

The Global Positioning System – GPS – is as ubiquitous as cell phones, guiding motorists and pedestrians the world over, ships at sea, and planes in the air. If the constellation of GPS satellites failed, or were attacked, motorists would have road maps and street signs to fall back on, but for ships you don’t have to get far offshore before guiding lights and buoys disappear. On the heels of presumed attacks on GPS by North Korea last year that forced hundreds of fishing boats back to port, Reuters recently reported on South Korea’s progress establishing navigational radio-beacons as a backup for GPS. Other countries may soon follow suit, but the U.S. military needs better alternatives to maintain its network-dependent advantages.

South Korea is working on establishing a chain of next-generation long range navigation transmitters called eLORAN that build off of World War II technology that guided ships and aircraft for decades until the 1990s when GPS’s accuracy and availability led most countries to disestablish their LORAN transmitters and infrastructure. With a range of a few hundred miles, South Korea’s eLORAN chain would only be useful in Northeast Asia. This range limitation, inadequate to reach across the expanse of the Pacific, may be part of the reason that the United States has been slow to pursue eLORAN as a viable GPS backup.

The U.S. Navy has been working for years to make GPS more robust and resilient, but most fixes are aimed at preventing jamming or spoofing (transmission of fake signals) and bridging short-term outages. That means these solutions only work against electronic attacks on GPS satellites and infrastructure that can be corrected or reversed. But one potential U.S. adversary has been working to improve their capability to physically destroy that infrastructure, which would render resiliency efforts irrelevant. China tested anti-satellite missiles in 2007, 2013, 2015, and possibly as recently as this past July. If the United States’ GPS satellites were destroyed early in a clash with China it could erase not just some of the U.S. Navy’s most important military advantages, but also its ability to perform many basic operations at-sea.