First, it is published by “GPS World.”  It shows wide recognition in the satnav community that space-based sources for positioning, navigation and timing should be complemented with terrestrial sources. Any question about that should have been put to rest at this year’s Munich Satellite Navigation Summit.

Second, it discusses that all kinds of technologies are possible, eLoran is the only one that can meet maritime’s forecast needs, but that the problems implementing it are political, not technical. 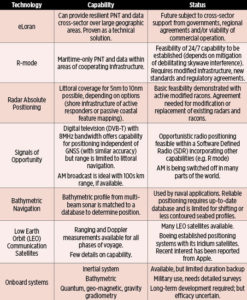 The General Lighthouse Authorities of the U.K. and Ireland (GLA) reached Initial Operational Capability for eLoran on the East coast of the U.K. Although it was shown to work well technically, it has not been possible to implement the system in Europe on a regional basis.

The GLA have also been involved in the potential development of other, non-satellite based, alternative systems. These may now form the basis of positioning resiliency either individually, or as a tapestry of systems serving the maritime navigator in Europe, unless current plans for commercial operation of eLoran come to fruition.

Here we consider the technical and regulatory status of eLoran in comparison with the other options, and explore necessary steps to protect the maritime navigator in the face of increasing GNSS outages. Several alternative backup technologies could be considered complementary to GNSS for future introduction into ships’ Integrated Navigation Systems. They have varying capabilities, and different limitations and levels of maturity, summarized in Table 1. Figure 1 shows estimated timescales for development and implementation.

■ eLoran is the only complementary backup system that can be implemented within the timescale envisaged for the introduction of e-navigation; however, there are political obstacles to implementation, at least in Europe. 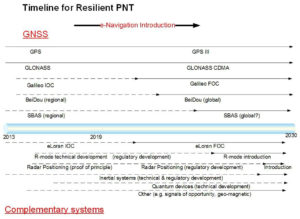 ■ R-mode and possibly radar positioning could be introduced by about 2030; however, both have inherent coverage limitations. Feasibility studies are needed to assess their economic viability.

■ Other options, such as inertial systems and signals of opportunity, might emerge as viable alternatives by 2030, but there are large uncertainties about technical and regulatory matters.

■ Quantum devices and options such as bathymetric and geomagnetic positioning can only be considered as longer term and uncertain possibilities.

■ A multi-system solution may offer the best approach. The IMO concept of the Integrated Navigation System aboard vessels, incorporating a multi-system receiver, provides flexibility for the inclusion of the above positioning technologies, if and when they become available, at an affordable cost.