Reuters Article carried by the New York Times, Wall Street Journal and others.

Editor’s Note: A good article from Jonathan Saul below.  For those new to the topic a couple points of clarification may be warranted:

Bottom line – this is an important, though reasonably easy, problem for governments to solve, once they have the focus and political will.  DG 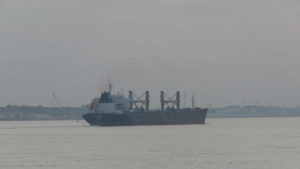 Ships use GPS (Global Positioning System) and other similar devices that rely on sending and receiving satellite signals, which many experts say are vulnerable to jamming by hackers.

About 90 percent of world trade is transported by sea and the stakes are high in increasingly crowded shipping lanes. Unlike aircraft, ships lack a back-up navigation system and if their GPS ceases to function, they risk running aground or colliding with other vessels.

South Korea is developing an alternative system using an earth-based navigation technology known as eLoran, while the United States is planning to follow suit. Britain and Russia have also explored adopting versions of the technology, which works on radio signals.

The drive follows a series of disruptions to shipping navigation systems in recent months and years. It was not clear if they involved deliberate attacks; navigation specialists say solar weather effects can also lead to satellite signal loss.

Last year, South Korea said hundreds of fishing vessels had returned early to port after their GPS signals were jammed by hackers from North Korea, which denied responsibility.

In June this year, a ship in the Black Sea reported to the U.S. Coast Guard Navigation Center that its GPS system had been disrupted and that over 20 ships in the same area had been similarly affected.

U.S. Coast Guard officials also said interference with ships’ GPS disrupted operations at a port for several hours in 2014 and at another terminal in 2015. It did not name the ports.