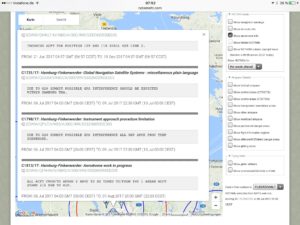 Criminals stealing high value cargo, delivery drivers hiding from their employers and those hiding illicit affairs from their spouses aren’t the only ones who regularly jam GPS reception. “Electronic countermeasures” are employed by a wide variety of security services, especially for protection of world leaders. Here is one example of what is commercially available.

We haven’t heard any reports of GPS reception problems during the G20 Summit this month in Hamburg, but the German air traffic authority was certainly  expecting some.

In one Notice to Airmen (NOTAM) German authorities announced that from July 6th to July 9th:

In another NOTAM they said that, for the same time period and because of possible GPS interference due to the G20 summit, approach procedures that used GPS were temporarily suspended.

It’s not unusual to see NOTAMs cautioning that GPS might not be reliable. We just did a quick check and found there are 42 current NOTAMs in the US cautioning about GPS reliability.

Internationally, routine warnings to aircraft of unreliable GPS have been posted for the Philippines, Turkey, Egypt, and North Korea.

What is a bit unusual is to have a warning pegged to a specific event like this one.