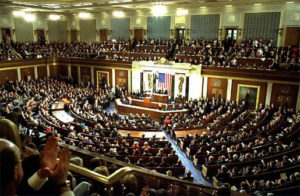 Editor’s Note: Last week the US House of Representatives passed H.R. 2825 – the Department of Homeland Security (DHS) Act of 2017. Part of that bill included provisions for the US Coast Guard, a DHS agency, which require establishment of an eLoran system to provide a complementary and  backup capability for GPS.
The George W. Bush administration announced in 2008 it would build an eLoran system, as did the Obama administration in 2015. Neither took any action on those promises while the nation’s dependence on GPS signals and the threats to them continue to grow.
Russia, China, Iran, Saudi Arabia, South Korea, and others have eLoran-like systems to protect their critical infrastructure in the event of local or widespread disruption of signals from GPS and other satnav systems.
The DHS Authorization Act is seen by Congress as a “must pass” measure because of the numerous security issues it deals with. The House version goes now to the Senate for consideration and negotiation.
Below is the text about eLoran from the legislation passed by the House last week. A longer version that called for implementing the system using a Public-Private-Partnership, was considered but not included in the final House version for procedural reasons. We understand that this may be revisited in conference with the Senate on the final bill.
“CHAPTER 807—POSITION, NAVIGATION, AND TIMING

“(a) ELORAN.—Subject to the availability of appropriations, the Secretary shall provide for the establishment, sustainment, and operation of a reliable land-based enhanced LORAN, or eLORAN, positioning, navigation, and timing system.

“(b) Purpose.—The purpose of the system established under subsection (a) is to provide a complement to, and backup for, the Global Positioning System (in this section referred to as ‘GPS’) to ensure the availability of uncorrupted and nondegraded positioning, navigation, and timing signals for military and civilian users in the event that GPS signals are corrupted, degraded, unreliable, or otherwise unavailable.

“(c) Requirements.—The system established under subsection (a) shall—

“(4) transmit a precise, high-power signal in the 100 kilohertz spectrum and meet the one microsecond accuracy requirement specified in the Federal Radio Navigation Plan;

“(5) be synchronized with coordinated universal time;

“(6) be resilient and extremely difficult to disrupt or degrade;

“(7) be able to penetrate underground and inside buildings;

“(8) be capable of deployment to remote locations;

“(9) take full advantage of the infrastructure of the existing, unused Coast Guard long-range navigation system (commonly known as ‘LORAN–C’), and subject to the concurrence and agreement of other agencies, unused facilities associated with the Ground Wave Emergency Network and Nationwide Differential GPS systems;

“(10) utilize and leverage the capabilities of the entity for development, building, and operation of the system;

“(11) function in an interoperable and complementary manner with other similar positioning, navigation, and timing systems;

“(12) be made available by the Secretary for use by other Federal agencies for public purposes at no cost; and

“(13) incorporate such other requirements determined necessary by the Secretary with respect to such agencies.

“(d) Secretary Defined.—In this section the term ‘Secretary’ means the Secretary of Transportation, acting through the Commandant of the Coast Guard.”.

(c) Implementation Plan.—Not later than 180 days after the date of the enactment of this Act, the Secretary, as that term is defined in the amendments made by this section, shall provide to the Committee on Transportation and Infrastructure of the House of Representatives and the Committee on Commerce, Science, and Transportation of the Senate, a plan to ensure that the system required under such amendments is fully operational by not later than 3 years after such date of enactment.