Do you know how to report a GPS disruption? – US Coast Guard 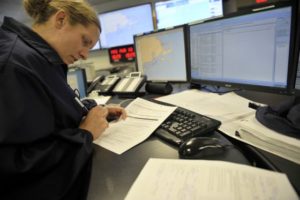 Editor’s Note: While the Department of Transportation is the lead for civil PNT issues in the US government, the Coast Guard has long assisted them in this role by running the Civil GPS Service Interface Committee (CGSIC), collecting interference reports, and the like. Most of this work is done by the USCG Navigation Center in Alexandria, VA. Recent GPS disruption events and the Coast Guard’s concerns with maritime cybersecurity, of which GPS disruption is a part, seems to have led to an increased level of concern.

A GPS disruption affecting as many as 20 ships was reported June 22, 2017, in the Black Sea. While the information in the report remains uncorroborated, an alert was distributed through the Maritime Administration’s Maritime Security Communications with Industry web portal alerting mariners to exercise caution.

The Navigation Center (NAVCEN) is encouraging mariners to review Coast Guard Marine Safety Alert 01-16 to re-familiarize themselves with the procedures to report a disruption and the actions they should take to mitigate the effects of a disruption.

Indicators of positioning systems interference include an intermittent signal, no signal, or an incorrect signal. Critical information to take note of during a disruption event includes location, time, and period of outage.

You should immediately report suspected GPS disruptions or anomalies to the NAVCEN. The report will be disseminated to the U.S. Air Force GPS Operations Center and the Federal Aviation Administration in an attempt to identify the problem and correlate with any other GPS incidents in the same general geographic location. Depending on the severity of the report, NAVCEN may refer it to law enforcement and/or other federal agencies for further investigation.

Reporting a disruption – or other navigational hazards or aids to navigation outages – to NAVCEN can be done electronically through NAVCEN’s website or via phone at 703-313-5900, 24 hours a day.