Editor’s Note: Scott Pace has been a long time adviser to the National Space-based Positioning, Navigation, and Timing Advisory Board. He is a big supporter of Protect, Toughen, Augment, and is eminently well qualified for this new role.  We our congratulations and best wishes. 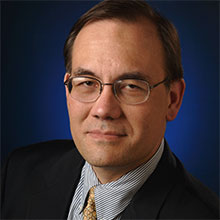 The White House announced today that President Trump intends to appoint Scott Pace to be Executive Secretary of the National Space Council.  Pace is currently Director of the Space Policy Institute and Professor of Practice of International Affairs at George Washington University (GWU).

Pace has a long career in space policy and is very well known and highly respected in the community.  Ever since the Trump Administration indicated that it would reestablish the Space Council, his is virtually the only name rumored to be in the running to serve as the head of its staff.  The Council was officially reestablished on June 30 and is chaired by Vice President Mike Pence.  Pace was spotted at Kennedy Space Center last week where Pence addressed the KSC workforce, further fueling speculation that he would be appointed as head of the Space Council.