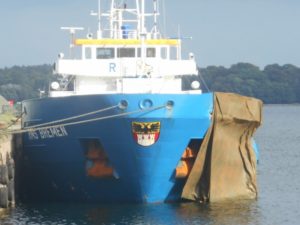 The Automatic Identification System (AIS) does a lot of things but it was designed to help prevent collisions between ships.

AIS transceivers use Global Positioning System (GPS) data and enable all equipped ships to “see” each other, usually on  electronic chart display systems (ECDIS). AIS information is also critical to Vessel Traffic Services and other shore-side safety and security systems. Normally AIS works great and it has been a great help to maritime safety in the fifteen years since it came into wide use.

But there is always an exception. Recently a colleague sent us this report of a ship collision in 2014.

The documentt from the German government is 36 pages long, but has a very concise summary. Here it is in its entirety  (emphasis added):

At 02111 on 5 September 2014, the outbound RMS BREMEN, flying the flag of Cyprus, collided with the inbound FRANCISCA, flying the flag of Antigua & Barbuda, level with the Friedrichsort beacon in Kiel Firth. The exact scene of the collision remains unclear. The AIS recordings of the vessel traffic service indicate that the two vessels clearly passed one another. An electronic chart of the manufacturer and type TRANSAS 4000 was on board both vessels. Recordings of them also indicate that the vessels passed each other. 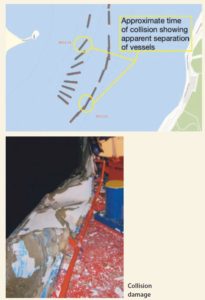 From the Nautical Institute http://www.nautinst.org/en/forums/mars/mars-2017.cfm/201738

Most every major accident is the result of a series of errors and factors, any one of which if not there could have prevented the mishap. This one is no different. Multiple errors were undoubtedly made by the crews of both ships. For example, as the report states:

The officer in charge of the navigational watch on each vessel failed to verify the GPS positions displayed with another system, such as radar, or visual bearings.

But it is interesting that, in this case, AIS and GPS information may have contributed to the accident, rather than helping to prevent it.