Editor’s Note: The Department of Homeland Security has long been concerned with the lack of an alternative for GPS to support critical infrastructure, particularly for time synchronization. It has had a Wireless Precise Time Cooperative Research and Development Agreement (CRADA) with UrsaNav since 2012.  Exelis, which later became Harris, subsequently joined the CRADA. As far as we know, to date all of the CRADA efforts have focused on using eLoran as a time source. We presume, since three transmitters will be involved later this month, that this set of tests/demos will also be about location. 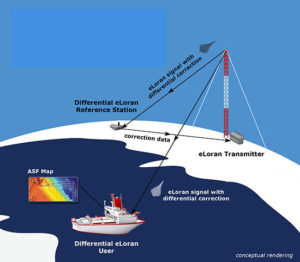 The Loran sites at Havre, Montana; George, Washington; and Fallon, Nevada, will continuously broadcast from 0900 (MST) June 20  through 1200 (MST) on June 30. The sites will operate on the 5990 rate but occasionally may operate at other rates.

Only the site at Fallon will operate as an eLoran site. The sites at Havre and George will operate as Loran-C sites synchronized to UTC.
For further information on eLoran, tune into the free webinar on June 15, “Alternative PNT Services.” One of the four presentations will be by Steve Bartlett, executive vice president of UrsaNav, who will provide a brief overview of eLoran technology and performance characteristics with a focus on timing in critical infrastructure applications. Other presentations will cover a new Satellite Time and Location service and indoor timing with a terrestrial beacon system.