“Secretary of Transportation Shall Protect GPS w/eLoran” – Bill in Congress 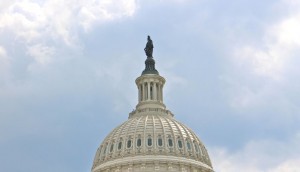 Yesterday Congressman Duncan Hunter introduced HR 2518, the House version of the US Coast Guard Authorization Act for 2018 and 2019. Chapter 807 begins:

“(a) eLORAN.—Subject to the availability of appropriations, the Secretary shall provide for the establishment, sustainment, and operation of a reliable land-based enhanced LORAN, or eLORAN, positioning, navigation, and timing system.

“(b) Purpose.—The purpose of the system established under subsection (a) is to provide a complement to, and backup for, the Global Positioning System (in this section referred to as ‘GPS’) to ensure the availability of uncorrupted and nondegraded positioning, navigation, and timing signals for military and civilian users in the event that GPS signals are corrupted, degraded, unreliable, or otherwise unavailable.”

While this is the Coast Guard Authorization Act and the Coast Guard is part of the Department of Homeland Security, the bill defines “Secretary” as “the Secretary of Transportation” and directs working through the Commandant of the Coast Guard to make eLoran happen. This is undoubtedly because:

Prior to being passed by the full Congress, this bill will need to be reconciled with the Senate version introduced last week that does not contain similar language about eLoran.