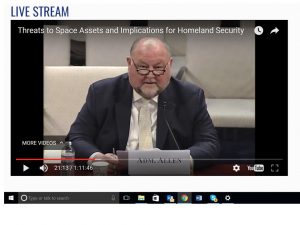 Admiral Allen confined his remarks to GNSS vulnerabilities and the need to Protect, Toughen and Augment GNSS. Written Statement

Hon. Joe Nimmich spoke mostly to the impact on first responders during a GPS outage. His message was that first responders would still respond, but with less speed and efficiency, in such a case.  We are not sure, though, that his statement portrayed the degree of impact on first responder comms and navigation that would happen and just how much worse things would be in an outage. During the January 2016 “GPS glitch,” for example, first responder radio systems reported faults all across North America. Joe is a great guy (we worked with him and know him fairly well) so it’t likely that this issue never came to his attention for some reason. Written Statement

Some interesting questions were asked after the formal witness statements, including whether or not the eLoran signal could be use as part of the nation’s nuclear command and control structure.  The answer seems to be “yes.”

The entire hearing is slightly more than an hour and should be of interest to most of our readers.  Transcript Here