Is It Time for a Backup? – Opinion, GPS World

Blog Editor’s Note: A great opinion piece by GPS World editor Alan Cameron.  His editorials regularly speak for the GPS community at large and this one is, as usual, right on.

“It’s always been time.” That was the first answer out of the gate, given in Session 3 of the Munich Satellite Navigation Summit last month. Dominic Hayes, Spectrum Management and Policy for Galileo, EGNOS and Copernicus at the European Commission, was prompt off the mark. “GNSS is so good, so easy and so cheap, other means are falling out of use.” Therein lies the peril.

That emotion was seconded by every other speaker on the panel. But of course. Virtually no one in the GNSS community at large, let alone those attending the Munich Summit, thinks otherwise.

Thinking and action do not go hand-in-hand, however. GNSS back-up resembles the weather, in that everybody talks about it, yet … yet … nothing changes. As long ago as 2015, the U.S. Department of Transportation and the Deputy Secretary of Defense made noises about building an alternative system to GPS in case of disruption, and certainly there were hand gestures aplenty prior to that.

Do we have a back-up, presently?

No. The U.S. government is in such a hurry to protect its borders that it gives scant thought to protecting what’s inside: critical infrastructure. 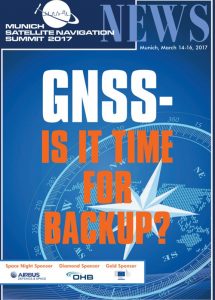 Things are more like they are now than they ever have been, what with the cloud and all. We’re storing so much data in the cloud, with more and more of the world’s operations every day keyed to and driven by distributed database processing, in huge data servers around the world. This is according to John Fischer of Spectracom, who is in a position to know. Precise timing at the micro- and nanosecond level plays a huge role in connecting and synchronizing users. But again, he was preaching to the choir.

Guy Buesnel from Spirent Federal reiterated the new threat sprung from Pokémon Go: a community of gamers and enthusiastic coders, generating homespun spoofing mechanisms for fun. They will soon realize, if they haven’t already, that there’s profit to be made there as well.

“We have become too reliant on GNSS today,” stated Buesnel. Most interference warnings are low level, but 3 to 4 percent are serious enough to disrupt receiver operations. And that still means you have to take action in response. He stressed the importance of a balanced systems engineering approach, and invoked Brad Parkinson’s PTA mantra: protect, toughen and augment.

Hayes called for a European Radio Navigation Plan, similar to the U.S. Federal Radio Navigation Plan (FRNP). Later, in response to a follow-up question, he acknowledged that “radio” need not be part of all encompassed systems; the proposed name is a legacy of modeling after the FRNP.

So far, the FRNP itself is nothing but a model, a little architectural construct of what someday might be. But nothing’s been built, that particular someday is no closer, and meanwhile the threats loom larger.