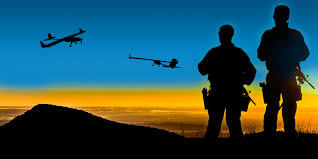 A major challenge facing the unmanned systems industry, especially in aviation and upcoming Beyond Visual Line Of Site (BVLOS) operations, is its reliance on weak, easily disrupted Global Positioning System (GPS) signals and the failure to address the problem.

GPS is the only wide area, wireless source of navigation available and authorized for use throughout the United States.* An overwhelming number of unmanned aviation systems rely upon GPS for navigation and stabilization.

Yet these signals are weak and easily disrupted. Powered by solar panels on satellites 12,500 miles in space, by the time they reach the earth the signals are typically weaker than the cosmic background noise. All too often reception by unmanned systems is disrupted by unintentional interference from structures and trees, or people with small jammers trying to avoid being tracked.

At the same time, while the powers that be are keenly aware of this issue, they have refused to act. Recommendations for interference monitoring networks and better enforcement of spectrum laws have gone unheeded. Perhaps most importantly, and despite several promises to do so, the government has failed to put in place a reasonably inexpensive nationwide system to complement GPS. The combination of GPS and the promised eLoran system would be almost unjammable and provide accuracy not available from either system working alone (see the paper on this by Dr. Gene McCall, formerly of the Los Alamos national laboratory). Yet “Navigation Strategy 2016,” released late last year by the FAA, makes scant reference to unmanned systems or this problem, and makes no mention at all of solutions. It just says that “Alternate Positioning, Navigation, and Timing” is going to be a research topic for 2030 and beyond.

We at Sensurion Aerospace are hopeful that the new administration and Congress will recognize this problem and act swiftly. We are particularly hopeful about eLoran. Earlier versions of Loran were widely used in civil (Loran-C) and military (Loran-C and Loran-D) aviation. That is why Sensurion has been working with a GNSS provider to incorporate eLoran it into our navigation suites as soon as signals become widely available.

This problem is overdue for a solution. On behalf of our entire industry, I urge the government to do so.

Editor’s Note: In addition to being CEO of Sensurion Aerospace, CAPT Burns is the former Managing Director of Flight Technology and B-767 Captain at United Airlines, and a member of the administration’s National Space-based Position, Navigation and Timing Advisory Board.

*Other nations’ satellite navigation systems, or GNSS, are available but the US government does not authorize them for use. Even if it did, they also transmit weak signals on frequencies near GPS so that they are also often disrupted accidentally or by jamming from “personal privacy devices.”