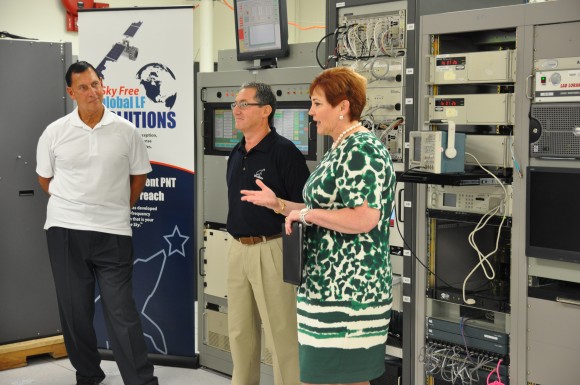 You have to get past the weeds in the sun baked parking lot carved out of the beach grass and sea-grape tangle. Then you go around to the back and through a locked door. The air is a bit stale as you enter a dimly lit warehouse room filled with massive, 1950’s era electronic equipment. Along the walls are storage racks stuffed with boxes of spare equipment. Passing through this room, you notice half a dozen military ball caps arranged neatly on a blank wall. Below each is the printed name and signature of its owner, a member of the station’s last crew.

But at the core of the building, in the transmitter room, the lights were bright last week, and the air was fresh and cool. Equipment hummed contentedly, belying the five years it had been since it was last regularly in use. Built to last for decades, the 1990’s era gear gave no indication that, aside from some intermittent demonstrations, it had been idle for most of the last five years.

On Friday, the 19th of June, the facility came to life again with the familiar tick-tick-tick of Loran pulses when Congressman Frank LoBiondo (R, NJ) pressed the command buttons to put an eLoran signal on air in the United States. The ceremonial “kick-off” started a 12 month demonstration and research program between the Department of Homeland Security and the UrsaNav and Harris Corporations. On hand for the event were a couple dozen people including Mr. Charles Schue, CEO of UrsaNav, Dr. Pam Drew, President of Harris Information Systems, and Mr. Dana Goward, President of the Resilient Navigation and Timing Foundation.

Congressman LoBiondo cited the importance of GPS services and the need to have more than one system to ensure our national and economic security.

Dr. Drew observed that a difficult-to-disrupt eLoran navigation and communications signal could be an important part of enabling UAVs to fly safely in our airspace.

And Mr. Schue pointed out that the recently released 2014 Federal Radionavigation Plan listed one of the nation’s policy objectives as not being critically dependent upon a single system for PNT. The plan, signed by the Secretaries of Defense, Transportation and Homeland Security, also specifically called out this eLoran demonstration and research as an important part of reaching that objective.

All agreed that it was an important day, with a lot of work ahead.

For more information see the excellent reports at: