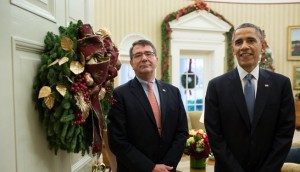 “I hate GPS,” President Obama’s nominee for Secretary of Defense, Ashton Carter, told a reporter just a few weeks ago.

What became quickly clear, though, was that he doesn’t “hate GPS” per se. What he hates is that it doesn’t work everywhere and that so many things, both military and civilian, just don’t work without it. So he’s really very much like most of us. We love GPS when it works, we hate GPS when it doesn’t.

And the reason we hate GPS so much when it doesn’t work is that we have come to rely upon it so much, and that so many other things don’t work at the same time.

Someone with a “personal privacy” GPS jammer anywhere within a quarter mile will make our cell phone calls drop and our Garmins constantly recalculate until they are out of range. More ominously, they can also disrupt landing systems at airports, IT networks, and any number of other critical systems.

Fortunately, the Defense Department and others in the government are already considering a second, non-space, difficult-to-disrupt navigation and time signal for America. And this one will penetrate indoors, underground and underwater.

Called “eLoran,” the government decided to build this system in 2008, but plans for eLoran put on hold for “budget reasons” in spite of its very modest price tag of about $30M/yr. Increased threats and instances of actual GPS disruption have spurred this new activity.

Unfortunately, not everyone in government and industry understands the problem, and the need to move quickly to implement technology that is proven and immediately available. The good Mr. Carter suggests in his interview that, in 20 years our dependence on satellites will be eliminated by new chip clocks, gyros and accelerometers.

Continued research is good, but we can’t wait 20 years. The father of GPS, Dr. Brad Parkinson, has called our dependence upon GPS “a single point of failure” and America’s “largest unaddressed critical infrastructure problem.”

The risk to America is now. We need to provide a backup and complementary system for GPS now. And that’s the goal of the Resilient Navigation and Timing (RNT) Foundation.

If we ever have a significant disruption or failure of GPS (like the Russians had with GLONASS in April) it will be disastrous. Then everyone will REALLY hate GPS.